I saw it first listing in the Advance magazine, then when I actually purchased it, I left it sitting on my shelf for exactly a year the recipe was tucked into the front cover before I every picked it up. At the heart this seems to be a novel about story telling through many media. There are story-recipes, clock-work stories, ballads, plays, pamphlets, and love notes. There is all sorts of language in the book too, while written in English, it is peppered with foreign words German, Yiddish, and more.

None of it will put off your understanding of the book, but it gives it texture and it adds to the sense of time and place. The majority set in Berlin during the Weimar Republic. There is lots of talk of war and revolution, and every chapter give a year, but the history challenged you'll have to piece the extra conflicts together yourself. There is mention of Bavaria, which I never could figure out if it was part of WWI or some separate conflict in this great time of turmoil.

Turmoil both internal and external is what sets these characters spinning. They are an eclectic assortment. 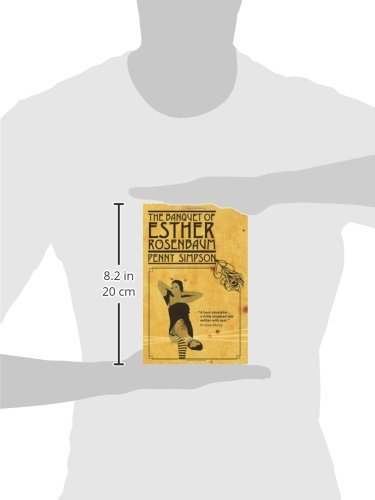 Our narrator is a Jewish chef, who is 7th tall, with two different color eyes. She is often the subject of fear and superstition because of her looks, and later celebrated because of her talent with food. But, in these times attention is not always a good thing.

There are her friends who are a used clothes seller, a seamstress, a Auntie Mame like woman who drives a motor car badly, gambles, and conspires with revolutionaries, there are more revolutionaries, playwrights, chefs, restaurateurs, artist, actresses, and clock-makers. They are all struggling against a world that doesn't make sense anymore, and struggling with one another over love and fame and ideas.

The book moves fast and it as if you are just catching snatches, we've barely gotten over a fight and we've landed into something new.

Having said that, it is not confusing. I'd have liked to read more of Esther's cooking and less of Kaya and Thomas relationship, but it made sense giving how Esther was so emotionally tied to them. There were clues right from the beginning, but I didn't pick up on them. This book wasn't a tear-jerker for me. There was certainly tragedy throughout, but there was distance in the writing.


Not the kind of distance that is off-putting, but that made the action feel slightly less immediate. I understood at the end. I recommend this book.


It is different from my normal genre reads and given that my last venture into literary fiction was disappointing, I am glad this one was not. Mar 30, Eli Brooke marked it as did-not-finish. The plot seems to fast forward suddenly fairly often, with no warning.

Maybe it was just the mood I was in, but I stuck with it for a week and then decided to move on to something else, which is rare for me. Nov 04, Andrew marked it as to-read. Liked her short story in Best European Fiction Allison Jones rated it really liked it Jun 13, Kelley rated it liked it Jun 11, Rachel Trezise rated it liked it Jan 26, Antun belongs to , the time of the first Independent State of Croatia, and Dagmar, , when a second attempt a Introduction; Contributors; Case 1. Abdominoperineal resection Vivienne Mathews; Case 2.

I feel in many ways the city of Berlin is also a character in this book and I adopted a similar approach in trying to convey its atmosphere and appeal. In the end, different scents and tastes became as important as bricks and mortar. AmeriCymru: How much of Esther is you — your own feelings or realisations of coming on age? As I said earlier, Banquet was a long time in the writing. It really began to come together the year several people I was close to died in quick succession. I grew up a lot at that time, but I also spent a lot of time angry, drunk and behaving impossibly.

Penny: Absolutely. And I ate a lot of fantastic cakes when I was there, all for the sake of research! AmeriCymru: The real and the fantastical or magical elements in this narrative are so skilfully and subtly interwoven that the reader sometimes forgets that this is not a straightforward biographical narrative.

A Brief Synopsis of the Book of Esther

There is no noisy crunching and grinding of gears as we change between registers. Seriously, I think the characters and the events that happen do help create that seamless tradition.


I love books that nudge you into a surreal world, without losing sight of what is familiar, or maybe known historical fact. AmeriCymru: What are your future plans? Are you working on another novel at the moment? Penny: Alcemi are publishing my second novel in The Deer Wedding is a novel set in Croatia, spanning two generations, two brutal wars and the controversial histories of two very special works of art.

The main character is an artist called Antun Fiskovic who experiences a sea-change in his fortunes as occupying forces take over the government of his country. I was in Croatia just after the s war ended, working with a theatre company who were staging a version of The Tempest on an island beach.

AmeriCymru: The Welsh independent presses are proving very successful at supporting a new generation of writers. What is it like as a writer at the moment, living and working in Wales?

Gwen really helped me get the whole thing into something resembling a publishable manuscript. Just look at how many bands are coming through the web and social networking sites these days, rather than the big recording labels. I like that DIY approach. It was a writing class run at Cardiff Library by my friend Jackie Aplin in the early s that gave me the confidence to start writing.